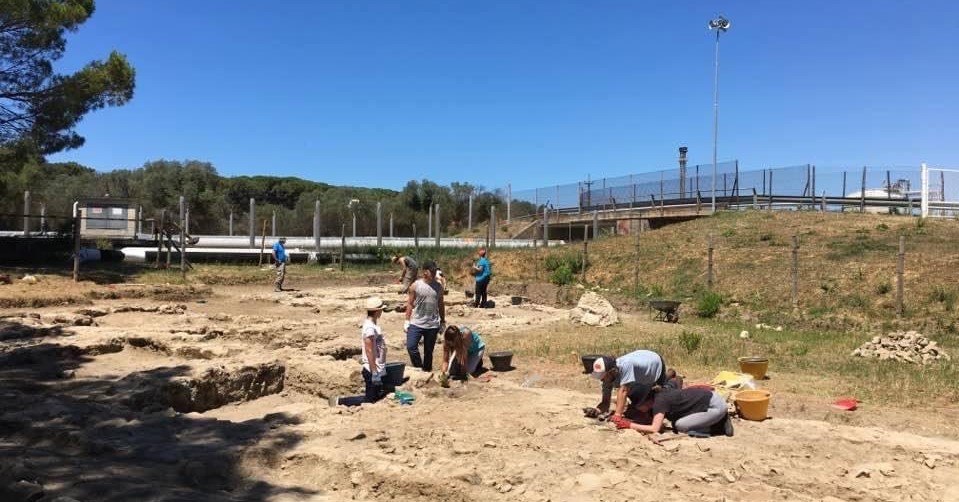 The Roman harbour of Vada Volaterrana: old and new researches

The Etruscan and Roman city of Volaterrae– the current Volterra was connected to the coast by the Cecina River valley; a harbour system capable of ensuring the arrival of the goods and the export of local products, developed over the centuries North and South of the river’s mouth.

Volterra is one of the most important Etruscan city, located on top of a high hill in the core of Tuscany. At the beginning of the IIIrd cent. BC the city – and Etruria as a whole – fell under the rule of Rome and, later on, some of the most important members of the aristocracy of Volterra became part of the Roman Senate, holding the highest political offices. Along the coast, the lords of Volterra built their villas and invested thier wealth in the production of wine, which was exported in amphoras in the Western provinces of the empire.

The coastal region featured lagoons, fed by numerous small streams, and bays protected from sea currents and the dangerous shallow waters off the coasts; this environement – now disappeared – was very suitable for ports trade activities. 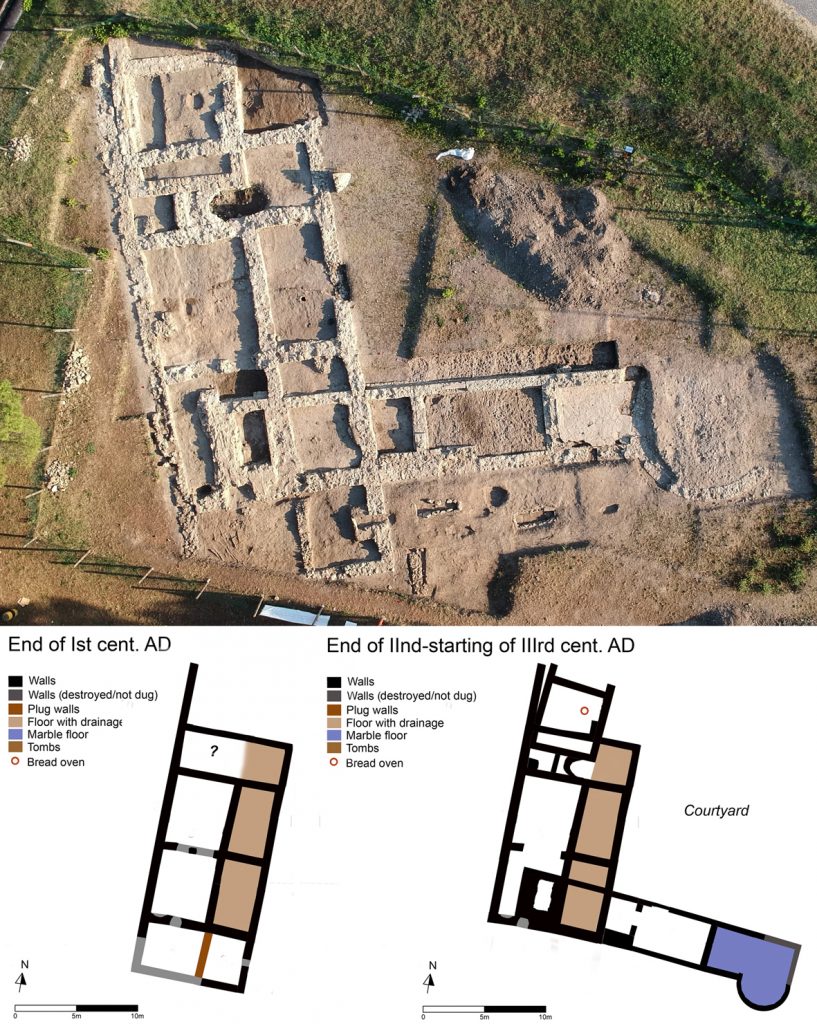 The most important of these harbours was located further North of the mouth of the river, at S. Gaetano di Vada, where the University of Pisa is still digging a Roman commercial quarter since the 80s. The Latin placename Vada Volaterrana is reported in many ancient literary sources (eg. Cicero) and in some Late Antiquity pilot books (eg. the Itinerarium Maritimum Antonini) which indicated the exact position of the landing areas along the Etruscan coast.

The quarter was built according to an organic plan in the Augustan age. Many buildings have been unearthed all over the years: two thermal baths, a large warehouse (horreum), a water tank, a monumental fountain, and the head office of the guild (collegium) in charge of the port activities. The members of the corporation were worshippers of the Eastern god Cybele. A marble statue of his lover Attis was found in the cold water pool (frigidarium) of the main bath house, where it was intentionally thrown in broken pieces in the Late Antiquity.

The findings of amphoras, pottery, coins, glass vessels and marbles testify the intensive trade activities; every kind of goods arrived in Vada Volaterrana from the entire Mediterranean basin. Once there, they were shipped to the countryside and the city of Volaterrae, while local products departed from Vada to the Western ports of the empire. The production of wine was especially significant; many amphoras’ workshops are known throughout the territory. Volterra’s wine travelled mainly to the South of France and, further North, to the river Rhine, where wine was drunk by Roman legionaries stationed in the camps guarding the borders of the Empire.

During the 6th cent. AD the area of S. Gaetano was gradually abandoned and partially occupied by a cemetery, whose grave goods date from the late 6th to the early 7th century. AD, when the settlement was permanently abandoned.

The building under excavation 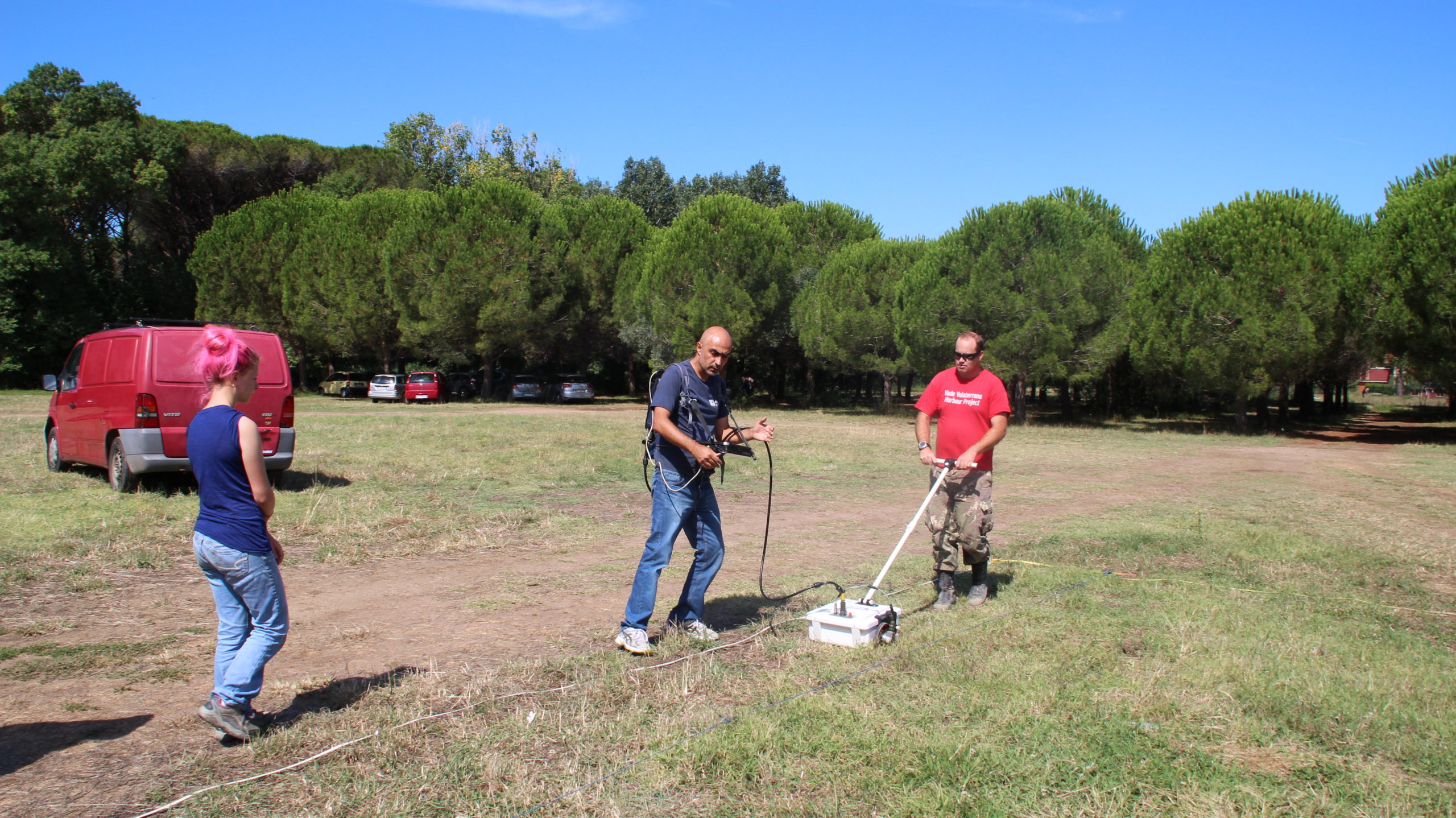 A GPR (Ground Penetrating Radar) survey run in 2012 in the Southern sector of the harbour settlement allowed us to identify undiscovered structures, whose excavation started in 2013. Starting from 2016, drone’s survey have been run at the end of every campaign, in order to get a detailed plan of the newly found buildings.

At the end of the Ist cent. AD a big rectangular building was erected in the area currently under excavation, previously empty of any structure. The building, whose function is still unknown, is made of six rectangular rooms. A courtyard was perhaps located next to the Northernmost perimeter wall of the building. The floor of three rooms was made of some layers of clay mixed with pottery fragments. Such a technique was usually employed to drain floors. As a consequence, these rooms were probably used to store – and keep dry – foods (most probably corn).

Afterwards, between the 2nd and the 7th cent. AD, the building underwent some interventions, meant to change its original plan and – most likely – its functions. For instance, in the North-Western sector of the excavation, a bakery was built between the end of the 2nd and the beginning of the 3rd cent. AD. 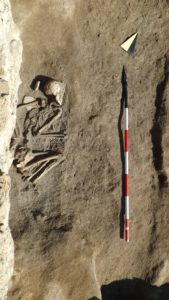 Since the very beginning of our excavation, tombs have been identified and dug out. We have understood that during the 5th-6th cent. AD – the building been already abandoned – the area and the structures were used as a cemetery – a common practice in Late Antiquity.

Despite containing no grave-goods, the burials allow us to get a privileged insight into the everyday life of the local community. Tunisian amphoras for olive-oil or fish sauces were often used as coffins for burying children , while simple graves dug in the soil were used for adults.

The tombs are related to burials of men and woman whose ages range from  35 to 45 years old. Three amphora tombs hosted children who were less than 3-4 years old.

The excavations carried on in the Northernmost sector of the site put on light the burial of a woman, 35-45 years old. The position of the skeleton is quite surprising: the woman was buried face down, with her left arm back. These features are very uncommon in Roman Imperial Age tombs. Stratigraphic data tell us the woman died in the 2nd cent. AD and her tomb was dug next to the Eastern wall of the most ancient building identified in this sector.